🕯 The Mother Of Kwanzaa Sister Makinya Sibeko-Kouate (July 1, 1926-Feb. 4, 2017) Transition 2017 🕯 Did you know this Ancestor A Descendant Of Virginia African Slaves Renaissance Woman Queen Mother Makinya is Responsible For The Establishment Of Kwanzaa as A Seven Day Ritual Ceremony For African People Beginning In December 1967? She Went To Africa And Studied Their African Harvest Festivals. Fourth generation of a pioneering African-American family, descendants from Madagascar and Tanzania – her more recent ancestors were freed from Virginian slavery and migrated to California before the Civil War.

Sister Makinya followed proudly in the tradition of her freedom-fighting ancestors. It was as president of the student body that she and 10 members went to a Black student conference at UCLA, where Maulana Karenga attended. He gave Sister Makinya a mimeographed sheet of paper with ideas on a new Black holiday called Kwanza (her spelling). When the students returned to Oakland, Sister Makinya hosted one of the first Bay Area Kwanzas in her home. When she graduated with honors from Merritt College she began taking Kwanza around the world. Sister Makinya traveled to 36 American states and 13 African nations to share her knowledge. She became widely recognized as an individual who was instrumental in spreading traditional community Kwanza celebrations throughout Northern California, the United States, Europe, Africa and Mexico.

I give thanks for having been present when Karenga (before he was Dr.) came into Oakland during the summer of 1967 to share the concept with us, in a gathering at the 42nd & Grove Street (now MLK Blvd.) Black House. I give thanks for folks like Sister Makinya Sibeko-Kouate (who my heart and soul know as the Mother of Kwanzaa), ASET Sister Barbara Duggan, Brother Fred T. Smith, and others, who produced the San Francisco Bay Area Kwanzaa Committee’s first Kwanzaa/Nguzo Saba handbook, and provided leadership for our inaugural celebrations in 1967. 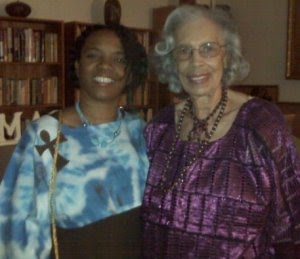 Then in 1971, Sister Makinya led a group of our Committee members and members of the Berkeley Youth Alternative on a summer automobile expedition through several states of the U.S. to spread the word to Sisters and Brothers who would embrace that word and become leaders and teachers for this old-yet-new tradition in their respective communities. Give thanks that there were Sisters and Brothers like these in all regions of the country, doing work like this, to bring forth that which our Ancestors were (are) intent upon us knowing! Give thanks for those of us who over the last 45 years have had our hearts and souls say to us, “Kwanzaa/Nguzo Saba is something sacred for and from the souls of African people!”

(More details in Chapter 3 of Kwanzaa: Black Power and the Making of the African- American Holiday Tradition by Keith A. Mayes)

This message is especially for those who might be vulnerable to the writings of the anti-Karenga, anti-Kwanzaa, anti-African devotees who emerge every December to spew their wretched venom, again and again — their laundry lists of what they perceive to be irreconcilable flaws in his character and this “made up” celebration. (Like, what is there on earth that humans do that isn’t “made up”?) Give thanks that Karenga and his colleagues had strength of heart & soul and intelligence enough to hear and heed, respect and revere what was being given, to bring forth Kwanzaa/Nguzo Saba. My response to the messages of the detractors is this: If you believe that GOD could use a jackass to present a deliverance message to a troubled people, as reported in Judeo-Christian teachings, surely The Creator and our Ancestors could make use of Karenga and his colleagues, with whatever imperfections they may or may not have had, to speak to the hearts and souls of Africans in America who were/are troubled by the racist inhumanity and malignant neglect that was/is a major by-product of euro-centric American culture.

My heart was moved this past season, as a Brother in South Africa (Azania), Baba Buntu, was explaining, via international telephone and internet, how this “made up” in America Kwanzaa/Nguzo Saba is playing a significant role in helping South African Sisters and Brothers deal with self-knowledge and inter-tribal unity issues. He related how the stresses and strains of apartheid and the ongoing efforts to overcome its residuals, and the challenges of capitalistic democracy and urbanization have resulted too often in Africans losing touch with their traditions and their collective-cooperative ways of life. For ten years now, he said, significant numbers of South Africans have embraced the Kwanzaa celebrations that he has been instrumental in facilitating, and are being inspired to search out their respective traditions to discover elements and principles that parallel those of the Nguzo Saba, as well as other elements that enhance their Kwanzaa celebrations. Additionally, he said the Kwanzaa/Nguzo Saba principles serve to inform and inspire the facilitators and young clients of a number of self-development programs and services that he works with throughout the year. Ashe´!

At the Richmond, VA Juneteenth Celebration of Freedom (6/18/2011), under the leadership of the Elegba Folklore Society, one of the presenters was Dr. Patricia Newton, a physician and specialist in behavioral medicine, discussing post-traumatic slavery disorder, and the things we must do in order to find the path to the realization of our greatest good.

Dr. Newton spoke of an onion like structure in our brains, the heart of which is called the “red nucleus” which plays a large role in dictating behavior. Layered around the red nucleus are “mirror neurons” that reflect what is stored in the red nucleus, giving rise to the behaviors that are routine and customary for a person.

“Our children are showing you that we are living a destructive insanity,” she said, a reflection of this country and our historical reality. “We’ve become experts at dying,” she added, (the ongoing devastating residuals of the Maafa experience).

If we are to make the most of the gift of freedom that our ancestors secured for us, Dr. Newton said that we need to be diligent in the development and utilization of vision and determination that will result in a new “virtual system” — a new layer on top of the red onion layer; a layer of values, aspirations, behaviors and expectations that nurture and manifest our greatest good.

“We must become the new Africans that our greatest well-being requires if we are not to go the path of extinction that the universe imposes on beings and things having no moral, ethical, social and spiritual responsibilities and self-determination,” she admonished.

In a brief private moment following her presentation, Dr. Newton agreed with this writer that the Nguzo Saba principles and symbols are excellent sources for the “rightness” that we need to pursue. “But we can’t leave it until the last week in December, She said. “It’s something we need to be about 24/7 – and have significant observances every month.”

(See this Visions & Victories article for more details of that Juneteenth event: https://hcvoice.wordpress.com/2011/06/27/dr-patricia-newton-speaks-to-juneteenth-celebrants/)

Like our sisters and brothers in Azania, like those of Kwanzaa 365 and Sankofa Saturdays in the Virgin Islands, like the H.E.R. Campus in Indiana, like the Sons of Ra in California, like the Ashanti Village Academy in Richmond, VA, like the Wo’se Community and Ile Omode School in Oakland, CA, like many, many others all over the U.S., and those in The Motherland, France, England and Germany, we must embrace these principles and precepts as we come forth by day and by night.

Let’s make it a priority for 2012 (like Sis. Makinya and others in 1971) that we discover and communicate, teach and learn with individuals and organizations in our respective areas that embrace Kwanzaa/Nguzo Saba, with an Each One, Teach One attitude — in order to strengthen and inspire one another and maximize our numbers and influence in our respective areas, in order to significantly fulfill our “moral, ethical, social and spiritual responsibilities and self-determination,” as Dr. Newton (and others) have advised – 24/7/365!!

(May your Kwanzaa – and all the days of your lives – be abundantly full of blessings and purpose divine!)

Ann Coulter & Steve Bannon , CointelPro and Right Wing Reactionaries put out the Articles and Propaganda that Kwanzaa was Started By The FBI and CIA White Nationalist Who Hate Afrikans

It was a New Afrikan Black Woman Who was And is the creator of Kwanzaa it’s time she get her credit !!!